John James was born in 1819 in Gorleston Suffolk, England while his parents were visiting England.  James’ parents were citizens of Bridgetown, Nova Scotia, Canada.  He left Canada when he was 17 years old with $200 in his pocket and came to Texas.
James arrived in San Antonio in 1837.  He  became the assistant surveyor of Bexar County under Bob Hayes (brother of Jack Hayes, Texas Ranger Captain).  John James was extremely interested in the development of Western Texas and was known for conveying more land to settlers than any other man in Texas.  His surveying trips took him over the greater part of Western Texas.  Common talk among San Antonio business men was that he knew the location of every water hole in West Texas.  John James surveyed and plotted the town of Bandera.

In 1852, a venture into the Texas Hill Country brought explorer and surveyor Charles De Montel to an area now called Bandera County.  During this venture, Montel met John James and the two men camped on the Medina river near a small town.  Montel and James spent many days gathering geographic knowledge of the area and evaluating the information.   In 1853, Montel and James returned to the camp site on the Medina river and selected an area adjacent to the Medina river for the townsite of Bandera.  They acquired 15,000 acres of surrounding land and created a master plan for a township development, the town of Bandera.

3. Lehman told of a battle at Bandera pass in 1841 which was also recorded in Wikipedia (the online encyclopedia) as the “battle of Bandera Pass”.  Texas Ranger Captain Jack Hays and about 50 rangers left San Antonio heading towards Bandera Pass.  After reaching Bandera pass they were engaged in a battle with Comanche warriors.  Captain Hays’ company was greatly out numbered but ordered his men to dismount, and fight. The Paterson Colt 6-shot-shooters had been invented and Captain Hays had armed his men with these weapons, which surprised the Comanches.  Both sides finally ended the conflict as night fell. The ranger company lost five men, dead, and many were wounded.  The Comanches had lost a great number of warriors and many were wounded. “The fact that 50 Texas Rangers had held their ground against hundreds of Comanche warriors marked a change in the way the frontier wars would be fought, and marked the turning of the tide in the war between Texas and the Comanches”.
Lehman reported that after the battle with the Texas Rangers the Comanches named the tiny settlement, Bandera.  Many Comanches would gather on the hills surrounding Bandera and point their arrows and say “Bandera!”.

Charles De Montel was born in Koenigsburg, Germany in 1812.  He attended the University of Heidleburg and also studied at Sorbonne in Paris, France.   Montel immigrated to North America arriving at the Port of Indianola, Texas in 1837.  He was an engineer and surveyed land in Texas from San Antonio westward to the Rio Grande and up to the Llano river.
Catrine Cordier Pingenot, wife of Montel, died in Germany.  Montel arranged for his three children, assisted by Jean Nicholas Pingenot, to come to Texas.  In December 1844 they arrived in Galveston, Texas on the French ship Probus.  During the journey back to San Antonio a courtship developed between Montel and Jean Pingenot.  They were married on November 13, 1845 in Castroville, Texas.  In 1847 Montel purchased a large tract of land on the Medina river.  A large house was constructed, circa 1848-50. 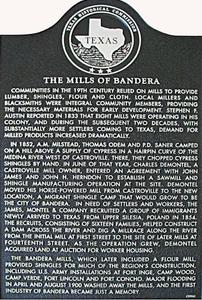 Montel and James built a saw mill by the Medina river which created many jobs,  Known as the Bandera mills of James - Montel & Company.  The mill was operated by horse power and made cypress lumber, shingles, and lathes.  . The word spread about a saw mill in Bandera that paid wages.  The first settlers to arrive in Bandera were the Mormons in 1854.  The Mormon families that stayed in Bandera acquired lots from the James-Montel company.  They built cabins and made a special contribution to the town.

In 1856 after Bandera County was created, the first commissioners court was held on January 26th.  Montel was appointed a commissioner with power to hold free elections of officials and to locate the county seat.  In August 1856, Montel filed a map of Bandera with the county clerk.  In December 1856, he located and surveyed all land appropriated for schools.  Montel signed the “Texas Ordinance of Secession” on February 2, 1861, an official document that officially separated Texas from the United States.
Charles De Montel died august 3, 1882 and was buried on his family ranch. 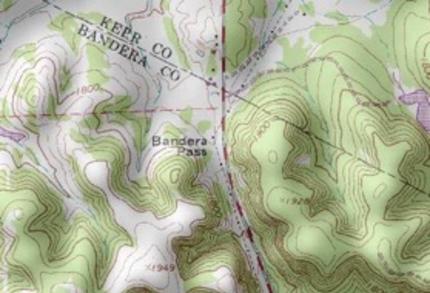 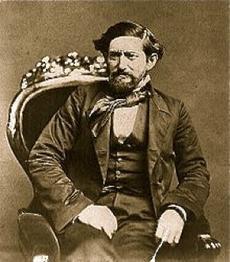 4.  The town of Bandera, Texas was founded in 1853 by Charles De Montel, John James and John Herndon.  The three men adopted the Name the Comanches had given the tiny town, “Bandera!”.
~ ~ ~

2. The most creditable information was reported by a man named Herman Lehman,when he was 65 years old. Lehman came to Bandera and spent a week in the home of Mr. and Mrs. J. Marvin Hunter, Sr. He told many stories that were later written by Jennette Hunter Saul in the “History of Bandera County,Texas”, Published in 1986.
Lehman reported that he was captured by the Apache indians in 1870 when he was 11 years old and again later by the Comanche indians. He was with the Apache tribe for four years and given thorough training in the “devilry” and culture, learning the Apache language. After he killed the Apache medicine man with a bow and arrow, Lehman fled into the hills hiding for a year.
Lehman was later taken by the Comanches and adopted into their tribe remaining with the Comanches until the United States government put them on a reservation in Oklahoma.  Lehman was taken back to his people in Mason county, Texas.
When Lehman was with the Apache tribe, he heard the Apaches talk about a battle in 1732 at Bandera Pass.  The Apaches attacked Spanish troops coming from San Antonio.  The Indians were severely defeated .  After the battle a council was held between the Indian chiefs and the Spaniards in which a treaty of peace was made.  In the treaty, the Apaches agreed to never come South of the Pass and attack the Spanish settlements at San Antonio de Bexar. The Spaniards agreed to never go North of the Pass and intrude on Indian hunting grounds.  In token of this agreement, a red flag was placed on the highest peak of the Pass.  The red flag, “Bandera” - which in Spanish means “flag”, was a warning to both Indians and Spaniards to keep the terms of the treaty..  Some reports say the Pass was given the name of a Spanish army general, “General Bandera”.  But various popular accounts crediting Bandera as the Spanish general cannot be corroborated, nor has his name been found on any Bexar muster roll.

There are several unique and interesting stories about the founding of Bandera. Included are the most popular renditions.

1.   Captain Jose de Urrutia discovered Bandera pass in 1739 while campaigning against the Apaches who had been threatening Spanish settlements at San Antonio de Bexar.  Captain Urrutia proceeded to the region of San Saba de la Santa Cruz mission by a direct route and surprised a band of Apaches and took captives.  His recommendation for a presidio, on the upper Guadalupe, to guard the pass was ignored.
The earliest map showing Bandera as a place is an anonymous one, dated around 1815 to 1819, that indicates an Apache village just of north of “Puerta de la Bandera.”  Bandera pass is indicated as the terminal point of an old Comanche trail from Nacogdoches.  Stephen F. Austin, when preparing his 1829 map for presentation to the Mexican government, designed the creek bed that runs into the Medina river from the vicinity of the pass as Puerta de la Bandera.  A map of Spanish Texas issued in 1835 by W.A. Ely shows the old Comanche trail intersecting the “trail to Mission San Saba” but does not specifically show the pass.  Maps of John Arrowsmith and compiled by H.S. Tanner of London in 1841, consistently show either Bandera creek or Bandera pass. 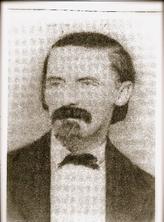 The County of Bandera was created in January of 1856 and CONSISTS OF 798 acres: 1-township and 5-communities.


Bandera - Cowboy Capital Of The World.

-  Fishing, tubing and canoeing on the Medina River.

-Fourth of July fireworks on the lake.

- Hiking at the Blossom Springs Ranch.

- Historical Baptist Church believed to have been established in late 1880.

- Bed and breakfast Lodging at the “Peace of Heaven”.

In 1854 Polish Silesia families  immigrated to Texas from Silesia Prussia (Poland - the Upper Silesia Opole region). They arrived at the port of Galveston  on December 3, 1854.  They traveled by boat to Indianola, Texas where they were met by a representative of Polish Priest, Father Leopold Moczygemba, founder of the first Texas Polish settlement located in pPanna Maria.
After a few months, word had reached Panna Maria about a town called Bandera that had a saw mill and needed workers.   In 1855 Eleven Silesia families left Panna Maria and settled in Bandera County.  They included rock masons, farmers, carpenters and craftsman.  Polish men helped to build and develop the city and county of Bandera. German craftsman and business men were also encouraged to settle in Bandera.  German business man, August Klappenbach, employed Polish settler Jan Dlugosz & Company (John Dugosh) to construct the first combined post office and store in the town of Bandera.
Polish Silesians who settled in Bandera County became American citizens and many Polish men signed the petition to form Bandera county in 1856.  The new county of hills was listed as “Bandera County”  on the petition.

*Polish men and their sons fought in the North American civil war .
*Polish women were mid-wives and learned to ride a horse, rope cattleand shoot a gun. 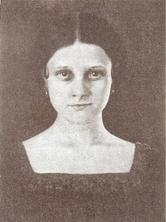 John Hunter Herndon was born near  GeorgeTown, Kentucky July 8, 1813.  After graduating from Transylvania College in both arts and law, he left Kentucky and arrived in Galvestion, Texas on January 18, 1838.  He lived in Houston and continued to  study law.  On April 12,1838 he was elected engrossing clerk of the House of Representatives of the Republic of Texas.  Herndon was admitted into the Bar November 23,1838 and practiced law in the Supreme Court of Texas and the District Courts of the Second Judicial District.
On August 27, 1839, Herndon married Barbara Makall Wilkinson Calvit, the only daughter of Alexander Calvit, and the heir to the Calvit sugar plantation in Brazoria County, Texas.  The plantation was known for its Arabian horses and cattle herds.  Herndon owned stock ranches in Matagorda, Guadalupe and Medina counties in Texas.  The 1850 census indicated that Herndon owned real estate valued at $100,000 and by 1860 he had acquired $1,605,000 in real property and $106,050 in personal property.  Herndon is believed to have owned a million acres of Texas land.
War and reconstruction destroyed most of the Herndon fortune. John Herndon died in Boerne, Texas on July 6, 1878.
It is believed that Montel and James recruited Herndon to help finance the development of the town of Bandera. 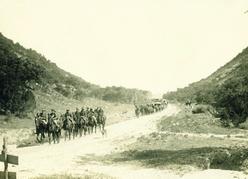