The town hall with the 16th century tower.

The wooden church of St. Barbara.

St. Anna’s Hill with the Basilica.

18th-century palace with a park that was destroyed during the war and later rebuilt.

The capital of wroclaw’s bishops goods.

Catholic church of St. Andrew built in 1285 with bell cast by K. Ferrari from Slawiecice.

Forest park with beautiful woods and rivers for walking and cycling.

Stretching along the Malapanew River Valley.

The oldest record of Strzelce dates back to 1271. In 1303 a castle was built at the site, followed by defense walls and two gates in 1327. The majority of the residents were engaged in farming (hop and grapevine cultivation), crafts and trade. In the late 19th century, Strzelce became an important center of limestone and machine industry. After the Plebiscite it fell to the German state.

After World War II, the town of Strzelce Opolskie was rebuilt from the war destruction. The county is now divided into seven communes, five of which are urban communes. Today Strzelce Opolskie county has excellent railway and road connections. The villages and farms are beautiful with poppies and grapes. The historical castles, churches and cities are popular attractions for tourist.

In 1382 the principality was reigned by the Opolska’s line of Piast, Boldo III and his son Bernard. after the childless death of Bernard in 1456, Strzelce and the surrounding areas was owned and controlled by Boldo V from Glogowek. In 1460 Strzelce’s district was annexed to the Opolskie’s principality and until 1532 had been reigned by the Princes of Opolskie Piasts. After the death of the last prince of the Opolskie Piasts - Jan II, the good, the entire principality came under the reign of the King of Czech, Ferdynard Habsburg. 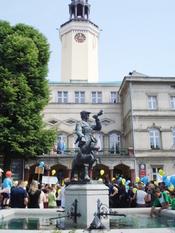 From 1551 to 1556 Strzelce belonged to the queen of Hungary, Izabella Jagiellonka. Later the Strzelce's goods got as a register, the emperor’s adviser - Von Redern. In 1615 the Redern family became the owner of Strzelce.

During the 30 year war in Poland (1618-1648) Strzelce again became ruled by the zech Habsburg family. In 1645 the Emperor Ferdynand III received Strzelce together with the whole principality of Opolskie and Raciborskie in register to the King of Poland, Wladyslaw IV. During the reign of Jan Kazimierz, the renter administrator of Strzelce was Kasper Colona. In 1683 Strzelce was bought by Zygfryd Promnitz, in 1650 by Count Colona. The line of Colona reigned over Strzelce until 1807.

In 1741 Fryderyk II subjugated Silesia and included it to the Prussian state. Since this time the range of the administration power of the Colona reign in Strzelce begin to decline. The period of Prussian reign began in 1808 and lasted until 1945.

Strzelce Opolskie County is situated in the Eastern part of the Opole Province and lies on the Western edge of the Silesian upland, and on the Northern slope of the Chelmska Mountain.

In the years of 1000-400 B.C., the area of Strzelce’s district was populated in the time of the Luzycka’s culture. People populated mainly the fertile fields in the South part of the Strzelce area. It is believed there was a flank trade border that went through Strzelce, connecting the Baltic’s sea-shore with Rome’s emporium.

Strzelce developed from a trade settlement that was mentioned in historical records as early as the 12th century. The first mention of Strzelce can be found in papers from the first half of the 13th century. The town’s location was based on Germany’s law in 1290 when Boleslaw the First (the Prince of Opolskie) rebuilt Strzelce’s city which was destroyed during the invasion of Boleslaw Wstydliwy. After Boleslaw Opolski’s death, in consequence of family divisions, came into existence the principality of Strzelce. It’s creator and ruler was prince Wojciech (Albert) who died without issue and the principality came under the control of the Niemodlinska’s line of Piast.